Chitlin’ Blues: Dancing in the Grey is a variety of physical theatre and Vaudeville. It explores the thin line between what it means to be black and white through the use of dance, sound, movement, and silence. this new work strives to rise above what we believe to be true. By taking a bold look at the power of racial stereotypes and how they have shaped the American entertainer, on and off stage. It is a tribute to the of legend Bert Williams.

"This is a beautiful performance at the Hollywood Fringe Festival! This non-traditional show performed by four actresses will take your breath away! It is a MUST SEE!"
~Enci Box, Bitter Lemons

"It’s pretty amazing: the unspoken power of a actor wearing blackface. Constance Strickland is, obviously, well aware of its impact and uses this and other powerful images to put together an amazing, “eclectic mix of physical theatre & vaudeville.” The result is a haunting, visceral study of race and gender that is at once disturbing and absolutely beautiful.

Within Chitlin’ Blues, Strickland and Memory Willis take on many roles, from male minstrel performers to seductive burlesque dancers to domestic partners. They’re joined onstage by Ruth Reynolds as Lillie, a pale, fragile figure in underclothes who looks as if she’s been plucked from a turn-of-the-(last)-century whorehouse, and Guebri J’aigle VanOver as the (almost) always composed, whiter-than-white Fancy Eve.

Whether it’s singing “Coon” songs from the 1890s; embarking on a comic, politically charged diatribe; adding a dangerous edge to our need for "Old Time Religion”; or inhabiting choreography that captures a sense of desperation and embodies terrifying struggles; together, these four women are able to wonderfully blur all sorts of lines. And make us think about what it means to be black, white and a woman."
~Jennie Webb, Backstage


"I could ramble all day about how this play took me into another time and how brilliant each of the actress were. Full commitment on a very tough subject. You have to see for yourself!!!!."
~Nicholas Davidson

"This beautiful piece of art was so intriguing, poignant and so very moving. The layers of upon layers of who we really are as human beings was truly magical and inspiring."
~Faith Collins, Women on the Verge 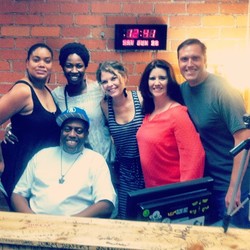